Jack Cassidy was at the top of his game at North Catholic High School. He lived in Gibsonia, PA, near Pittsburgh. At age 18, and six feet tall, he was set to play football and baseball during his senior year.

His parents, Bill and Stephanie, were watching him from the stands when everything changed.

It was the second game of the season, Aug. 31, 2017. “He ran the ball on several plays, got tackled, and quickly got up” said Bill. “Then he was running and planted his left foot; that’s when he heard a pop and went down.” 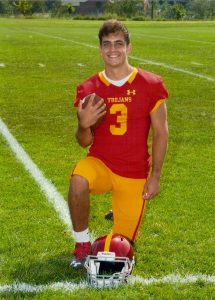 The athletic trainers wrapped Jack’s knee in ice. “It was swelling up quickly,” said Stephanie. “We got an evaluation the next day, and soon after, an MRI. We were still hopeful that he’d be able to play again.”

A few days later, on Jack’s birthday, the doctors called. Jack had torn his ACL, and he was done playing football for the year.

In this serious but unfortunately common, sports injury, the anterior cruciate ligament connects the thighbone (femur) to the shinbone (tibia) to stabilize the knee joint.

“Jack was devastated,” said Bill. “The whole team was upset as they had lost one of their best players.”

Jack started on physical therapy immediately. “It is important to regain knee motion and decrease the swelling prior to knee surgery,” Dr. Akhavan said.

Jacks ACL reconstruction surgery would use a hamstring tendon from Jack’s knee. It was set for Oct. 11, 2017, at Allegheny General Hospital.

“Five minutes after they started, Dr. Akhavan came back to the waiting room to talk to us,” said Stephanie. “When he opened Jack’s knee he found that his ACL was still there.”

“His ACL was, for the most part, intact; it had just peeled off the femur,” said Dr. Akhavan. “We thought he would be an excellent candidate for an ACL repair.  The benefit of this procedure is that it preserves the patient’s ACL and does not require using a graft.” Jack was the first patient Dr. Akhavan had seen that was a good candidate for this procedure.

“With this specific type of ACL tear, the ligament is still attached to the tibia. We were able to pass sutures through it and attach back to the femur with an anchor,” said Dr. Akhavan.

“Jack was the perfect patient, in very good physical condition,” he added. Typically, ACL reconstructions require at least six months of rehab before an athlete returns to sports. With his ACL repair, Jack was off his crutches within one week. He started rehabilitation with a fierce determination.

“He progressed quickly through his entire rehab in four months, allowing him to return in time for baseball season,” said Dr. Akhavan.  “With a typical ACL reconstruction, patients are usually just getting ready to start jogging at that point.”

“It helped that Jack had done pre-operative rehab,” said Kristin A. Bozic, NASM CPT, an AHN strength and conditioning specialist at the Wexford Health + Wellness Pavilion. “Plus, he was strong and physically fit. After his post-op rehab, Jack had a smooth transition to Sports Performance.”

The AHN integrated model allows patients to move at their own pace and with greater flexibility.

“We talked to Dr. Akhavan,” said Bozic. “Because this was a different kind of ACL repair, he said we could train Jack as if he was five months out of surgery, instead of three. We moved along to strength, speed, and agility training sooner.”

“We take a total body approach, head to toe, helping to rehab the current knee problem and reduce the risk of future injury,” she said. “You need confidence to get back on the field. One of the biggest roadblocks for injured athletes is hesitation, which can actually make them more susceptible to another injury.”

“Jack was awesome. He came in confident, was very positive, and worked hard,” said Jeremy Mccullough, CSC, an AHN sports medicine conditioning specialist.  “He also did his homework — exercising for mobility, flexibility, and strength at the weight room at school.”

“Jack was a unique case, so we conferred with everyone and moved him along as he could handle it,” he said.

Jack started working out with the baseball team in February, even taking his turn at bat. By the end of March, he was running and playing in the outfield. Jack had three sets of braces to support his knee during sports or exercise.

The baseball team had a great season. Jack actually flew home from a family trip to Bermuda to join North Catholic for the WPIAL Class 2A baseball championship game on May 29. They won the championship, with Jack driving in two runs.

Jack graduated from North Catholic in 2018 and is heading to Ohio State to study finance and business analytics. While he’s still a fitness enthusiast, he’s not playing sports in college. He’s going to focus on his studies, and keeping his knees intact.