Taylor has been seeing Dr. Christoforetti since she was a high school freshman on the track team. She was a star sprinter, so when she began experiencing hip pain she quickly scheduled an MRI. Dr. Christoforetti discovered Taylor had a hip impingement, and while she was in a lot of pain, she wasn’t ready for surgery. She instead opted for physical therapy, but the pain worsened. 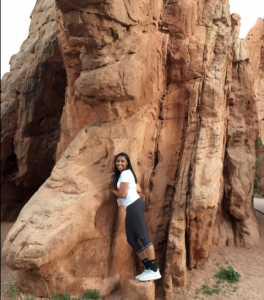 Now a sophomore, Taylor decided surgery was the best option for her running career and underwent her first hip surgery at just 15 years old.

“It [the surgery] went great. I was able to go back to track and compete in both 11th and 12th grade.” But by the end of her senior year, symptoms returned. “I was in so much pain I fell to the ground during my race. I didn’t know what was going on, but Dr. Christoforetti got me in right away.”

Taylor had torn her hip flexor, which was particularly heartbreaking because she’d just signed a track scholarship to run at Slippery Rock University. Luckily, she was able to keep her scholarship, but in 2013 during her 2nd year of college, she tore her hip flexor again. “It was my first indoor meet and the final 16 meters of the race. So that was really disappointing.”

Together, she and Dr. Christoforetti organized a plan which included cortisone injections.  “I’m hard headed so I kept running,” she said, despite the pain, and waited 2 more years before her second surgery.

“Now I can finally walk around with no pain. It was disappointing to not be able to run track, but it’s true what they say: when one door closes, another one opens.” Today, Taylor is a track coach at Geneva College and, while she’ll never be able to fully sprint again, she enjoys running 5k’s and being able to walk and run without pain.